There are enough old wives’ tales to fill every week of your 40 weeks of pregnancy, but it’s time to put some of the most persistent ones to rest. Check out the truth to these 10 pregnancy myths!

1. Myth: Morning sickness only happens in the morning.

Truth: While it’s true that 75% of expectant moms experience this frustrating huntington beach hookup, morning sickness is actually a misnomer, since mssql date format can strike at any time — morning, noon, or night. If you’re part of the (un)lucky majority of moms-to-be suffering from nausea and vomiting, you’ll probably start noticing it begin around six weeks of pregnancy, worsen at nine weeks, and start to improve by weeks 16 to 18. An unfortunate 20% of pregnant women will experience “morning sickness” symptoms into the third trimester. If there’s one saving grace about all this nausea, it’s this: Studies show a reduced risk of miscarriage in women who experience nausea and vomiting during pregnancy. Don’t worry if you never have a nauseous day: The absence of nausea in the first trimester (which happens for 25% of pregnant moms) isn’t a bad sign! Remember… every pregnancy is different!

2. Myth: You should be eating for two when you’re pregnant.

Truth: Have you heard people say that you should be eating for two now that you’re expecting? Don’t take the phrase too literally. Yes, you’ll need to eat with your developing baby in mind, but that baby is tiny and doesn’t need as much food and calories as you do. In fact, you’ll only need an average of 300 to 350 calories more each day starting in the second trimester and around 450 to 500 calories more per day in the third trimester to grow that baby of yours. And you’ll learn pretty quickly that 300 to 500 calories doesn’t get you that far when you’re scouring the pantry!

Truth: Think that all expectant moms feel their best during pregnancy? Think again. While some moms-to-be feel glamorous and look like they’re glowing, plenty of others pregnant women feel pretty crappy during their nine months. And that’s okay!! After all, between heartburn and constipation, nausea and swollen ankles, acne and body aches, it’s perfectly understandable if you’re feeling icky instead of radiant. Every woman’s pregnancy experience is unique, so honor yours in whatever shape, form, or version it comes in. Ditch the expectation that you’ll be at your prettiest when you’re growing a baby and that way you’ll come to appreciate whatever your pregnancy journey ends up looking and feeling like.

4. Myth: You can’t dye your hair during pregnancy.

Truth: There’s good news if you’re not looking forward to having your roots show during pregnancy: You can dye your hair while you’re pregnant! Experts usually advise some precautions, such as waiting until the second trimester before heading to the salon (or the medicine cabinet) for a dye job, opting for highlights instead of a single process dye, and using all-natural dyes when possible. Though there’s no hard evidence that chemicals in hair dye are harmful to a developing baby, it’s usually recommended to skip the salon in the first trimester when the baby’s organs are developing.

5. Myth: You can’t lay on your back during pregnancy.

Truth: This myth has some truth to it — but only after the fourth month. Once you’re four months pregnant, your baby and uterus are big enough to possibly compress some of the major organs in your body when you lie on your back. Before the second trimester, however, sleeping or exercising on your back is fine. And don’t worry if you’ve found yourself on your back after the fourth month. This recommendation to stay off the back is only referring to prolonged periods of time on your back. If you accidentally fall asleep on your back, you and your baby are going to be okay. And your body will most likely wake you up enough to get you to turn to your side before anything worrisome happens.

6. Myth: You must sleep on your left side during pregnancy.

Truth: It’s true that some experts say left-side sleeping during pregnancy is ideal because the left side puts less pressure on the major arteries, maximizing blood flow and nutrients to the placenta. But if you’re more comfortable on your right side, go for it. Use pillows to get yourself comfortable and don’t force yourself to stay on one side only. Or try these methods for sleeping more comfortably during pregnancy. Very few people stay in one position throughout the night, after all, so feel free to switch from side to side without worrying!

Truth: You may have heard that fish should stay off the menu when you’re expecting because of the dangers of mercury, but the truth is if you avoid all fish during pregnancy, you’re missing out on crucial nutrients (omega-3 fatty acids, in particular) that are important for baby’s brain development. In fact, studies show that a mom’s fish intake during pregnancy is correlated with higher verbal IQ, better social skills, communication skills, and motor skills in her baby. So definitely go fish, aiming for 8 to 12 ounces of low-mercury fish a week (that’s about 2 to 3 servings weekly), such as salmon, sole, flounder, and others. Canned light tuna is also okay (though avoid tuna steaks if possible), and steer clear of raw fish until after you give birth.

Truth: Here’s another myth that has some truth to it. Yes… “pregnancy brain” is real! Moms-to-be actually do lose brain cells (maybe that’s why you’re always forgetting things!). But the reality is that it’s only temporary — your brain will plump back up after birth. Wondering what’s going on? Blame it on your pregnancy hormones, which cause the loss of some gray matter in the brain to makes more room for other parts of the brain to fire up — the emotional, maternal, and nurturing side… brain power that you’ll definitely need to help you take good care of your new baby!

9. Myth: How you’re carrying can clue you in to whether you’re having a boy or girl.

Truth: When I was pregnant with my first child, people would literally stop me in the street, the subway, and grocery store to tell me that I was for sure having a boy because I was carrying only in the front and my nose didn’t widen. In the delivery room we were surprised when the doctor called out “it’s a girl”. Fast forward to my next three pregnancies, where I carried similarly. So how many boys do I have? None!! I have four daughters! The point of this story is illustrative: There is no truth to any of the gender prediction old wives’ tales. They’re fun to play, but the reality is that you can’t tell whether you’re having a boy or girl based on the way you’re carrying, whether you have morning sickness or not, the date of conception, what your nose looks like, or what the ring-on-a-string tells you. None of these gender prediction theories have any scientific backing and any of them that seem “accurate” are most likely coincidental — after all, those predictions will be correct 50% of the time!

Truth: Eager to get labor started? There are some do-it-yourself ways that are proven to induce labor (nipple stimulation, for instance, or eating dates!). But other methods — even those that hold promise (such as having sex) — don’t really stand up to the science, including the one about eating spicy food to jump-start labor. There’s no harm in trying spicy food (if you enjoy it) — but experts agree that the most you’ll end up with is heartburn, not a baby. In other words, there is no scientific correlation between spicy foods and inducing labor. If you have friends that swear it worked for them, it’s more likely a coincidence and labor would have started even if they didn’t chow down on that extra-spicy jalapeno chili!

Now that you’ve learned about pregnancy, it’s time to learn about parenting! Because the only thing more stressful than bringing home your new baby is figuring out what to do once you get home with your newborn. My course, Newborns 101, will teach you everything you need to know to feel at ease caring for your baby. And with your newfound confidence, you’ll enjoy more of those precious newborn moments.

Up To Date, Nausea and Vomiting Of Pregnancy. July 2021

American College of Obstetricians and Gynecologists, Nutrition During Pregnancy. June 2020

Mayo Clinic, Is It OK to Use Hair Dye During Pregnancy? July 2017

American Academy of Family Physicians, Sleep and Pregnancy. May 2020

American Academy of Pediatrics, Fish & Pregnancy: What is Safe to Eat? November 2019

National Institutes of Health, National Library of Medicine, The Effect Of Late Pregnancy Date Fruit Consumption On Delivery Progress – A Meta-Analysis. May 2020 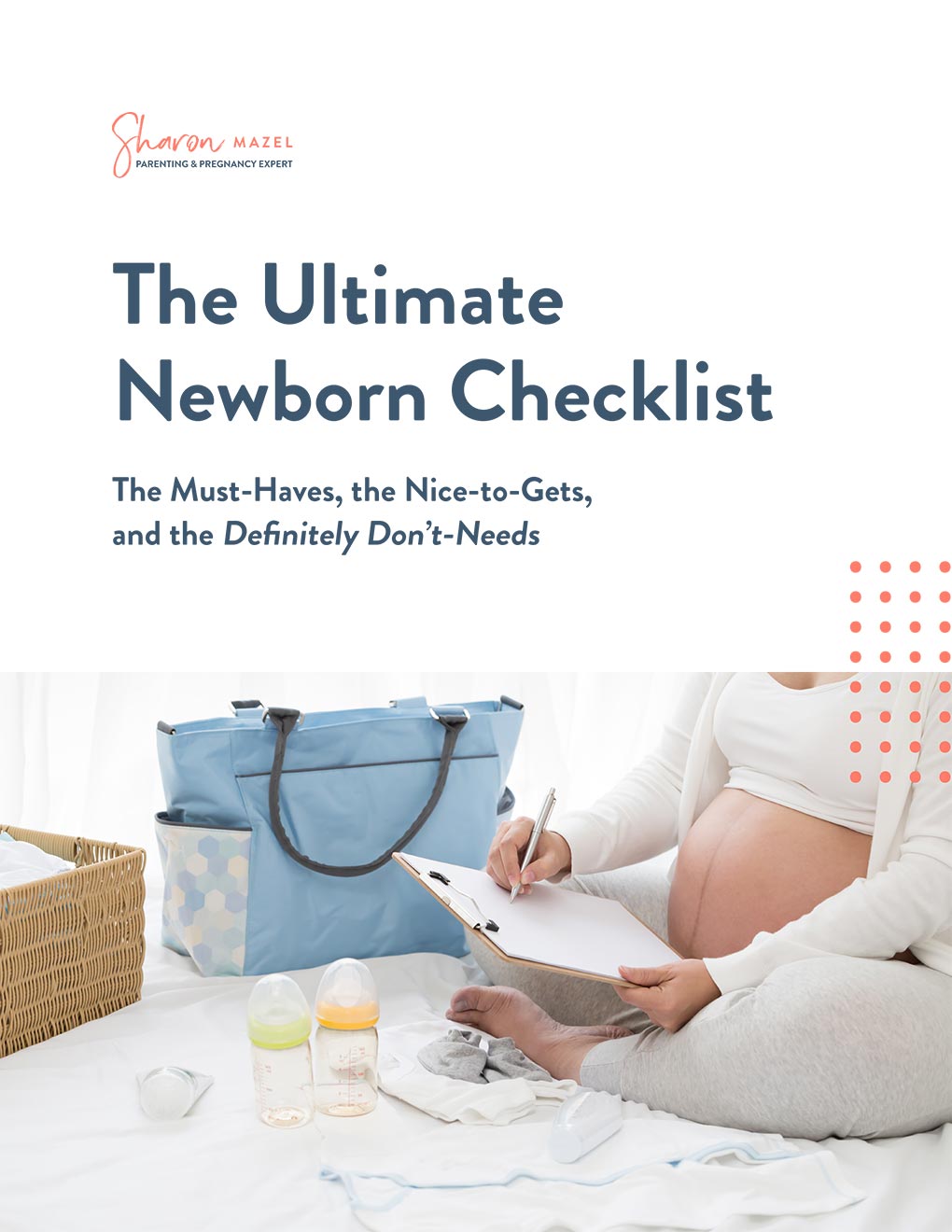 It’s easy to get overwhelmed thinking about all the things you’ll need to care for your new baby. But the truth is, the newborn must-have list is much, much shorter than you think!

Download this free checklist so you can plan, register, and shop with confidence (and without breaking the bank!)

Enter your name and email below and I'll send it right away.

Thanks! Please check your inbox.